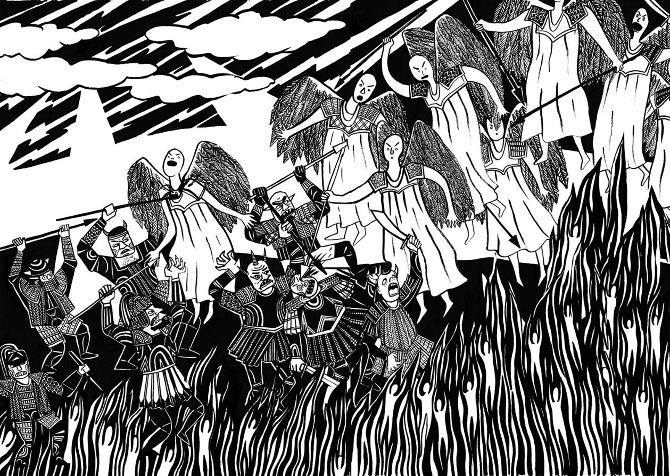 So there was this gross profile of the cartoonist Isabelle Greenberg over at Metro News, that kind of is emblematic of the incredible amount of patronizing bullshit that happens when you are a woman in comics, and dealing with any kind of press.  I’ve chosen to excise to the choice bits for your both shock and awe.

Let’s start with something that occurs near the bottom of the profile, and seems to occur in just about every interview of a female creator in comics at some point in an interview:

“I ask if she feels it’s important to encourage the next generation of female graphic novelists.”

Of course you did.  Because you would never ask a male comic creator if they feel it’s important to encourage the next generation of female graphic novelists.  This is a version of the age old: what’s it like being a woman in comics, what do you have to say to other women hoping to get into comics, do you as a woman think comics blah blah blah blah.  Maybe the first time this question was ever asked it was important.  But at this point in time, I feel that it not only excludes the artist from the larger artistic community, it eats up valuable PR/Comics talking real estate, that a male creator would not lose.  That whole section of an interview where this question is asked and the creator responds to it, is a whole like 2-300 words in a small article, that you’ll never get back.  That’s 2-300 words every interview you are spotting your male competition in art.   And moreover it allows your work to be preclassified.  You’re not an artist anymore, you’re a GIRL artist.  And because of that box, some people are only going to judge you against other GIRL artists.  Which in an industry where guys like Dan Didio and others can get up at a con and say patronizing and insulting things about the technical chops of women in comics (“we just hire the best people(and only 1 percent of those are women)”)–is not a good thing.  It perpetuates the notion that a girl drawing a comic is fundamentally somehow different than a man drawing one. And they should be judged differently(less than).

So of course Isabel Greenberg says the thing that most women in art put in this position say:

Which leads us back up to the verrrry first line of the entire article:

“Isabel Greenberg is the new face of comics. Not just because one look at this petite, pretty blonde confounds the lingering cliché that comics are created by spotty adult males in unwashed Spider-Man T-shirts.”

The hook to this entire article isn’t Greenberg’s artistic merits.  It’s 1) that she’s a woman who is *shock* making a comic and 2) she is small and pretty!  I mean when I read that I almost stopped reading right there.  The levels on which that represents the worst of attitudes towards women in the arts is gobstopping.  And that this article was written by another woman made it even more depressing.  And lest you thought that was the last of this kind of thing…it continues on through the article, where Greenberg’s authority as an artist is continually undercut by patronizing descriptions of her as a woman.

“‘Obviously, when I was younger I read The Beano and Asterix,’ she says, spiralling patterns into her cappuccino froth, ‘but the first comic that made me realise there was something else out there was Alan Moore’s The League Of Extraordinary Gentlemen – which I bought because I thought it was a costume drama.”

She can’t even just say what comics she grew up reading, without this crap.  This is one of the more subtler ones in the article, but I think to intercut this particular answer with the frivolity of what she’s doing with her cappuccino paints Greenberg as a sort of distanced unserious interloper–the author has married Greenberg’s dipping of finger into her drink to her approach to comics.  She’s dabbling in her cappuccino, the same way she dabbled her way into comics is what that conjunction says fundementally.

But lest you think I’m pulling that reading out of thin air:

“ This autumn, the sprite-eyed north Londoner has her first lecturing job at Worcester University.”

So Greenberg is a serious enough person that she is going to be lecturing students at a University, however she’s not so serious that she can avoid being compared to a pixie(we get it, because she’s small and pretty, and presumably her comics are made from magic, and not hard work or anything).

And then the capper:

“she lights up, perched on the edge of her seat as if poised to flit around the room like Tinkerbell.”

She is a grown ass woman!  You asshole.