Hiroaki Samura’s epic(in the sense of it was coming out when I was in high school) Blade of the Immortal series came to an end this year.  And while in summation you’d have to judge it overly long, unfocused, and in some parts almost mindrendingly wasteful of it’s time on the page–you’d also say it did all of this with a style and grace that few if any other books matched.  Samura made long and unfocused look better than it had any right to.  And you stuck through the parts you hated because you knew when Samura wanted to give it to you, he could damn well give it to you unlike any other spot in comics.  He could do things on the page with composition, movement, rhythm, and figure that are simply without comparison.

One of the things that most fascinates me with Blade of the Immortal is his character’s movement.  Particularly the character of Makie whenever she has a duel.  Makie is the real star of the Blade of the Immortal series.  Her story and attitude is the most fascinating and interesting in the entire series–and her duels are drawn with the most creativity and expression of any of the fights in the series–which is saying a lot.  Samura imbues her movements with a genuine genius–it is enough that he tells us in the story that she is this otherworldy demon of the sword–but he actually shows it.

To try and capture some of this rhythm I’ve color coded one of Makie’s fights.  The yellow panels are the soft panels.  These are the drops in the action where when pulled off right, create a sensation of floating for the reader.  The blue panels are the loud panels.  And then the red panels are the emcee panels–which are basically like on a mixtape when the DJ cuts in to tell you how: 1. the thing you just heard is impossible in it’s dopeness and 2. Like seriously did you hear that shit?

The emcee panel is a common trope in most manga adventure fights.  It is how they really ramp up the drama of the fight, and how they give the fight a narrative perspective within the fight.  It allows the reader to know that what they’ve just seen is oh so dope, and completely impossible–so impossible that even the way you actually saw it, you couldn’t see the true essence of it’s core dopeness.  It’s basically comics fight crack, and it is amazing it has never really caught on super well in superhero comics, which have a history of dialog during fights–but not much in the way of anything as keen as what you would see in even the most basic of boys adventure manga.  Anyways.

So those are the colors. 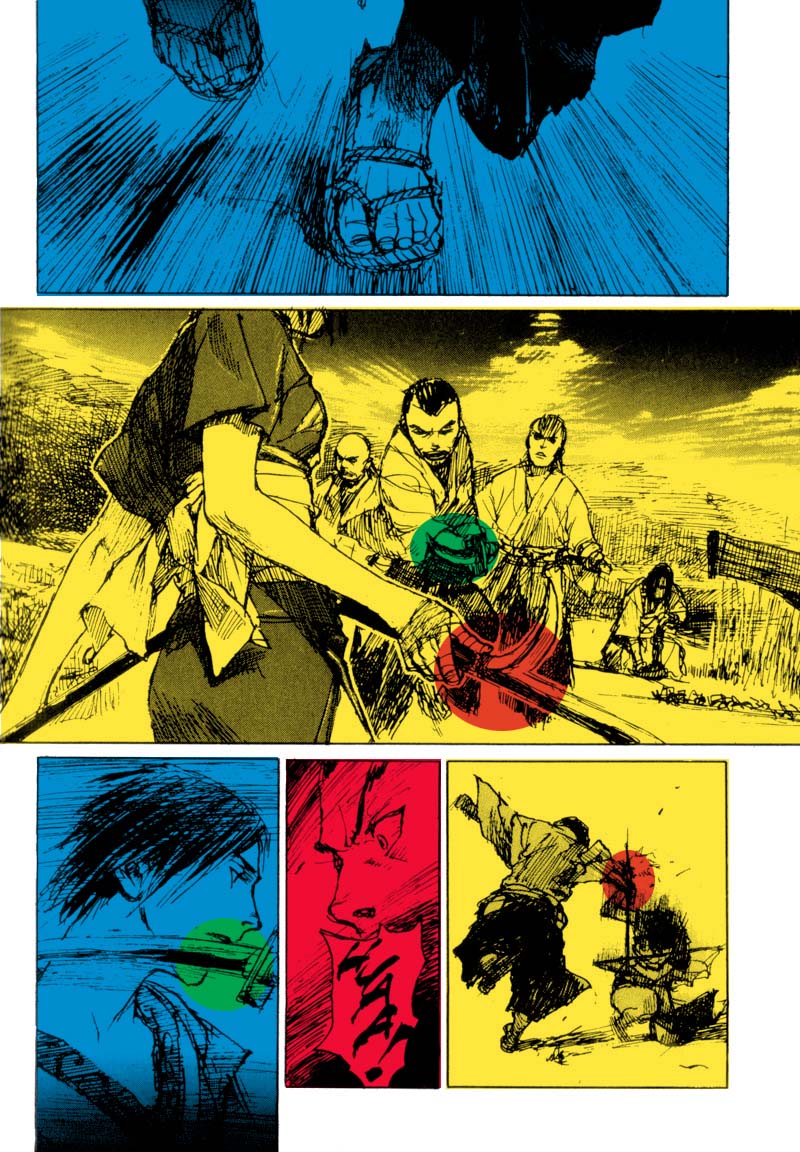 Oh yeah.  I also put in some circles so you could track the combination movements stitching together the beats. 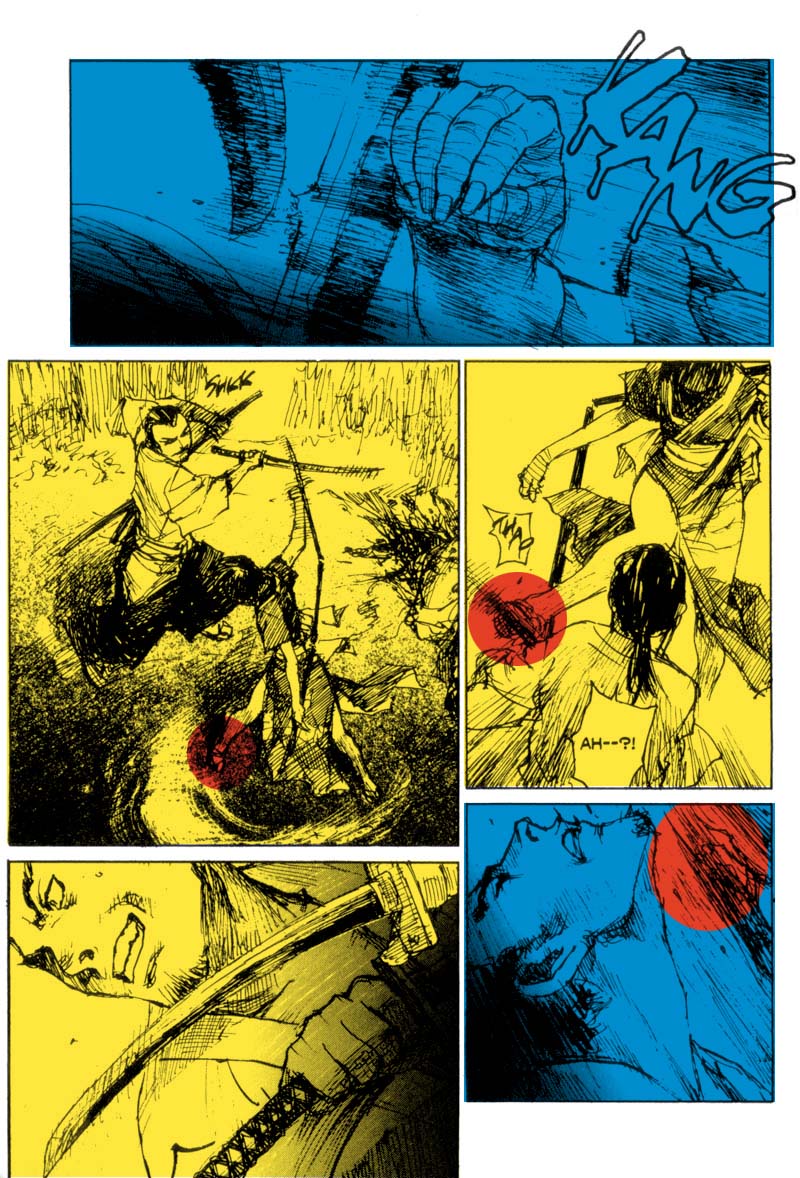 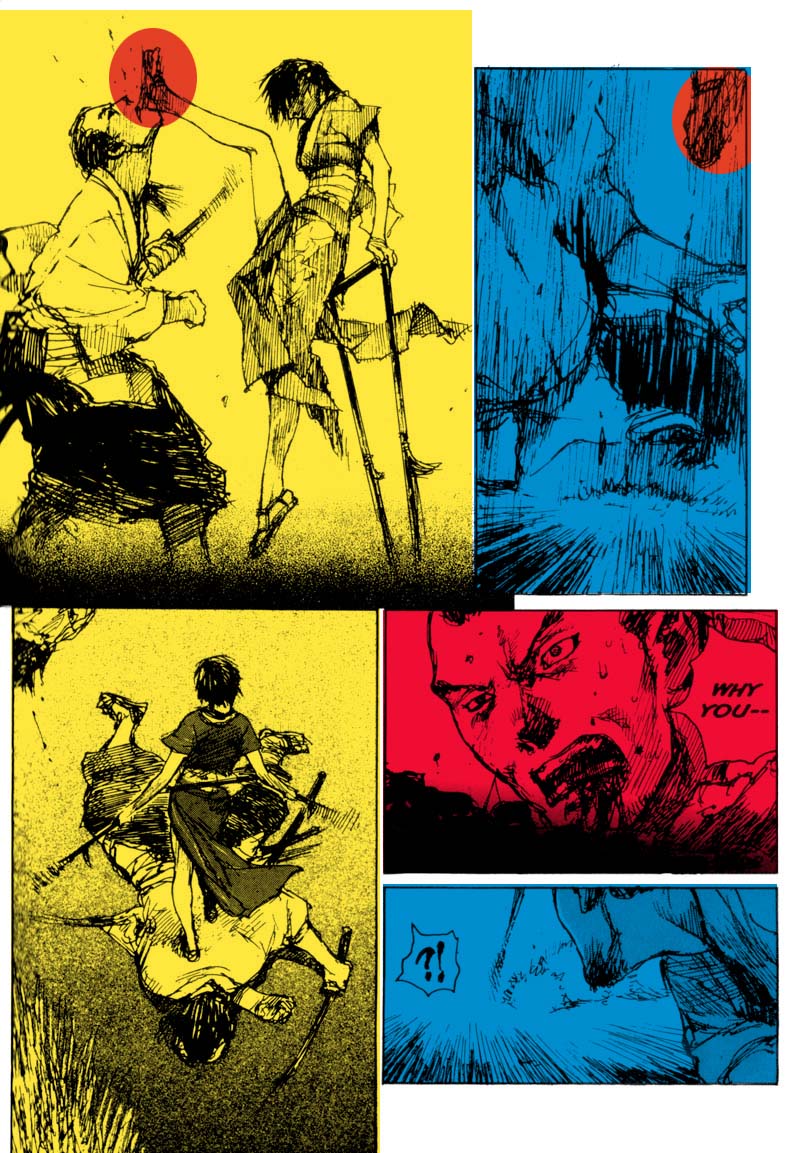 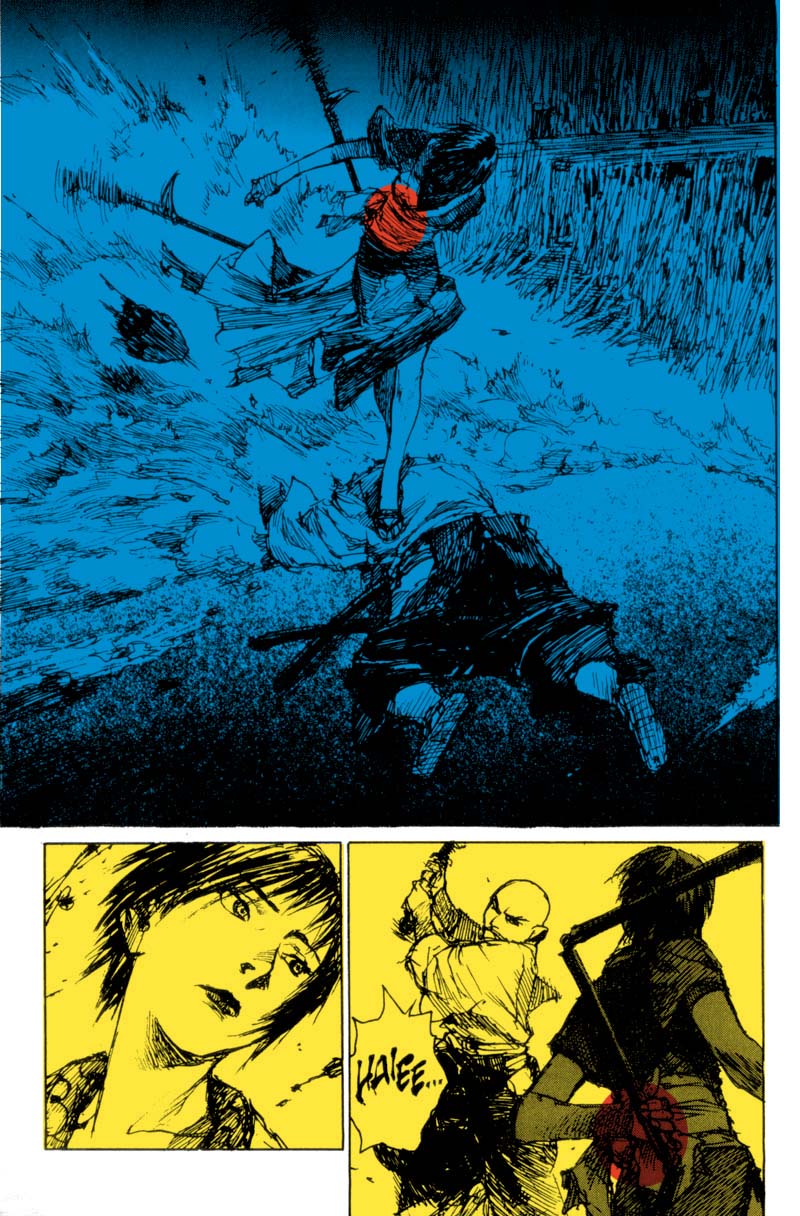 Check on that page how he speeds up the page with the first panel, just to drop it on the last two panels as he brings in the actual threat.  He stores up so much momentum with that top panel and it’s all there behind Makie’s back.  She’s got a whole page’s worth of weight behind her back.  Also Makie’s “these boring pitiable fools, who dare try to take up the mic against me” look.  That should have been a red emcee panel–but I think the angle of her head plays into the motion in the panel right after it–so I think it’s more of a pair with that panel and is the sinew which bolts the top panel to the last one. 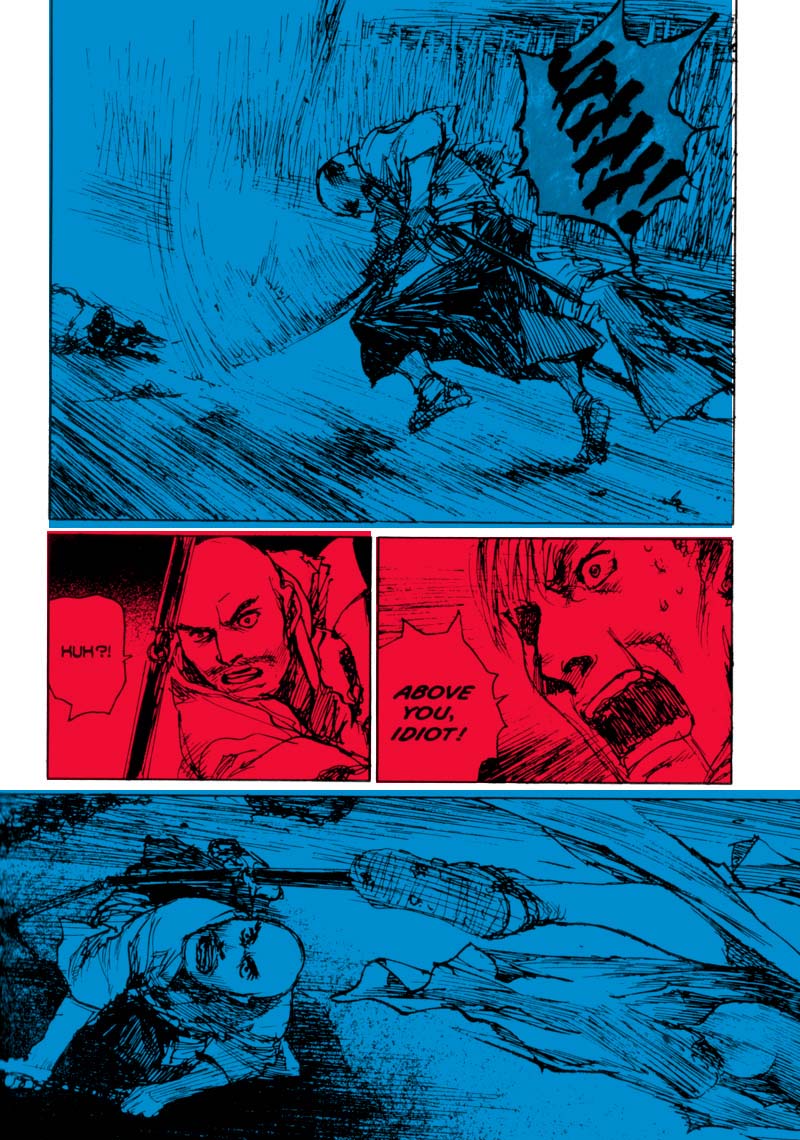 The great thing here is that our expectations because of the previous page was Makie unleashing holy hell on this guy–but Samura delays it for a page–and transfers that motion into Makie’s leap.  He’s not giving us what we expected there.  There’s a cognizance there. 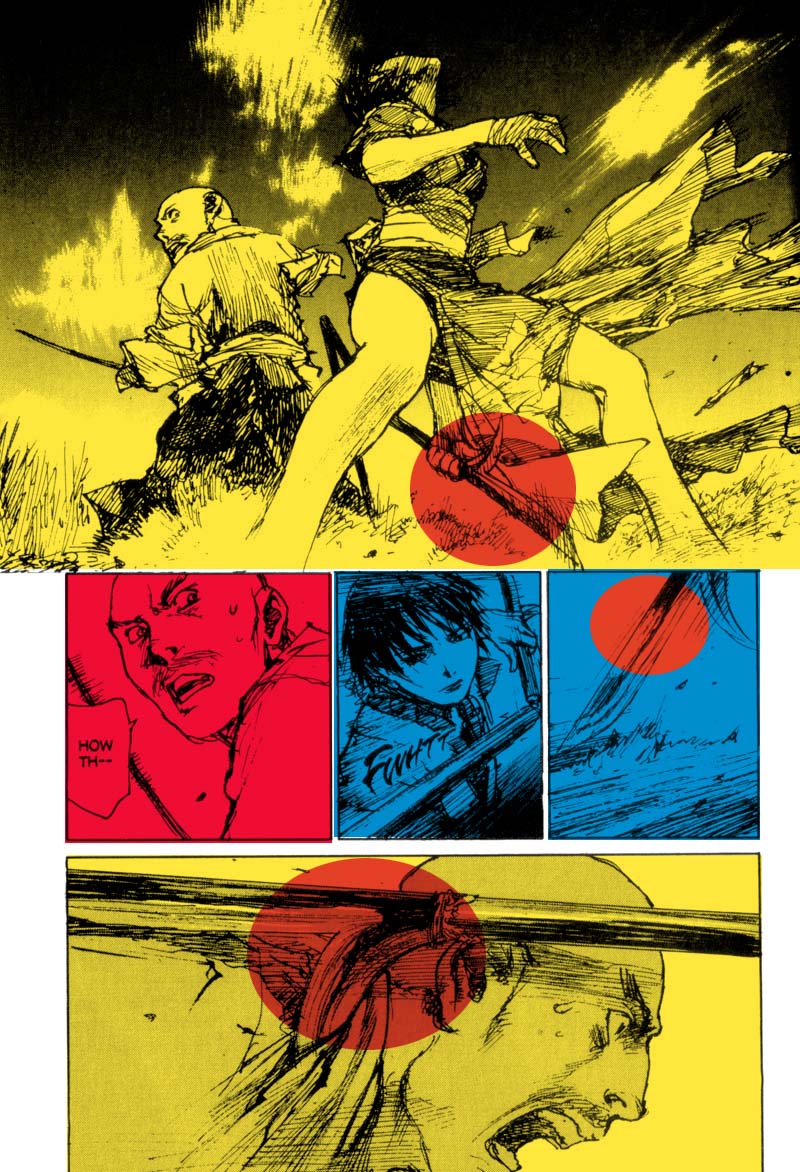 The pose in the top panel is almost a Makie signature pose.  Also sexual imagery like whoa.  And he didn’t even have to go T/A broke back to do it.  There is no tangible difference between fight scenes and sex scenes in comics. 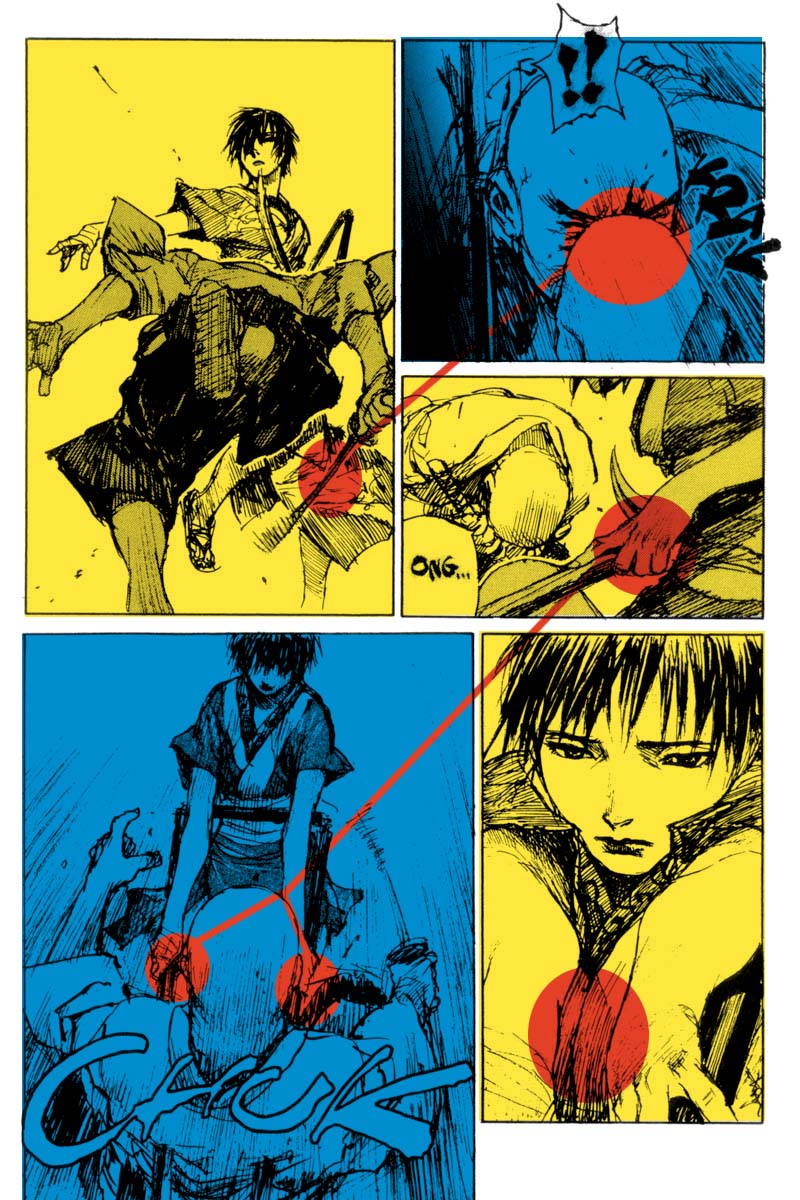 Check the windup on that knee to the guy’s face.  That’s coming off her planted leg, which you can see she’s building momentum into with the swivel of that lead leg.  And then even as the blood is still flowing up out of the guy’s face as he pulls back, Makie is already ramming her blades into the sides of his head.  And again with that face. 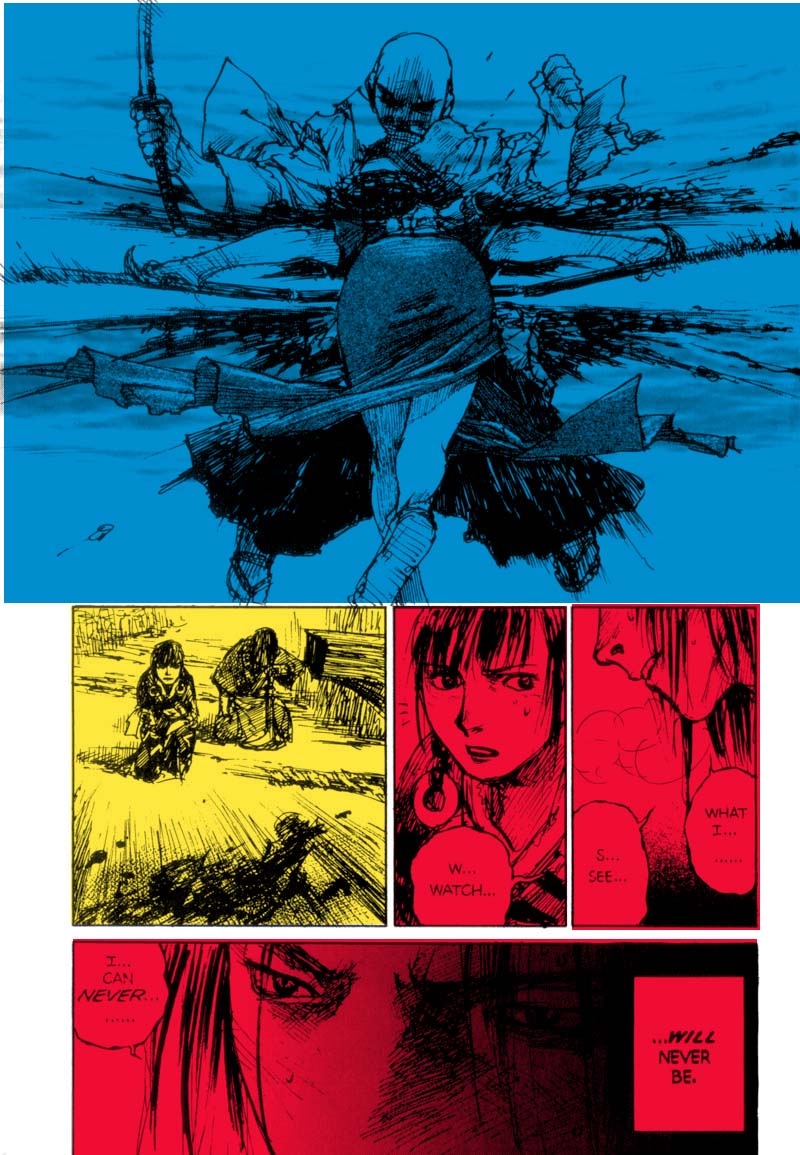 And there’s your payoff.  But then Samura pulls us back from the fight, and lenses it through Anotsu’s perspective.  We go from really being right in the middle of the fight, to being far enough away from it to see it as the miraculous thing it is. 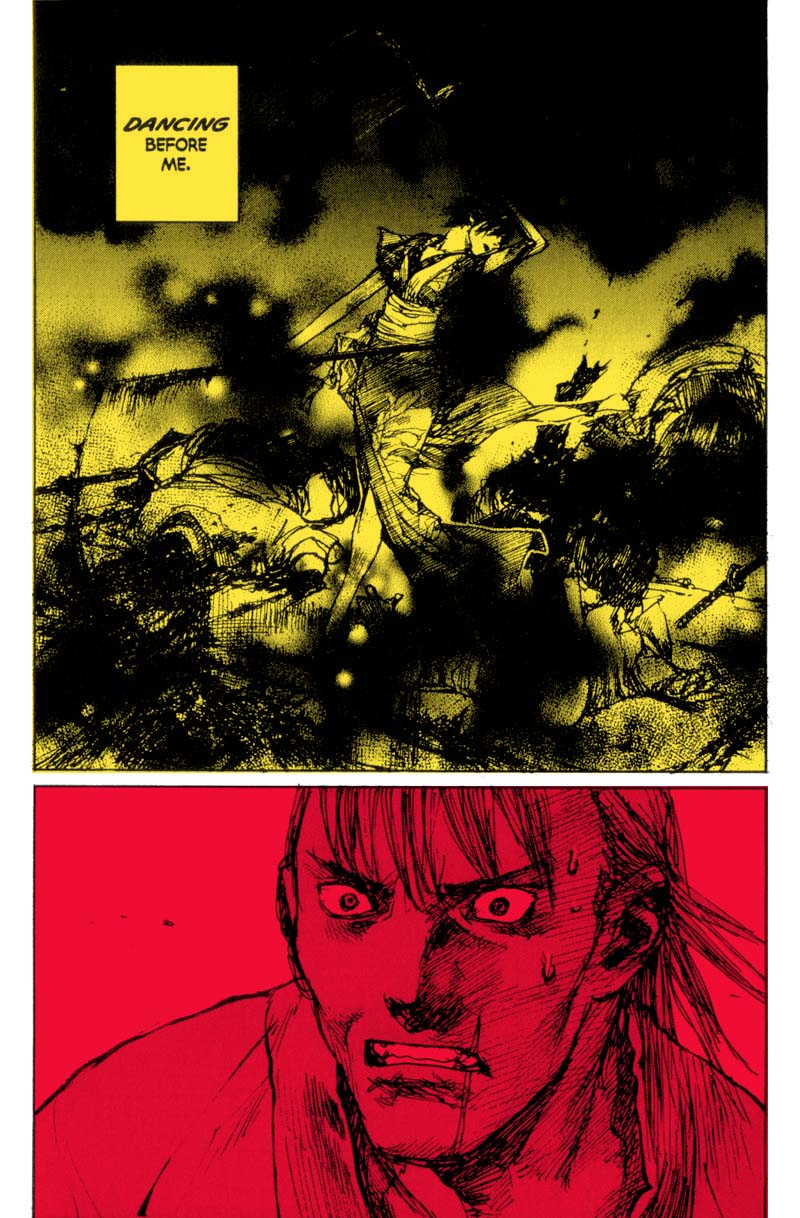 I love the juxtaposition there of Anotsu saying that Makie is dancing for him, but then other dude is the guy we see watching–and we see the horror on his face.  It gives what Makie is doing more of an edge, more of a horror, than if we had gone back to Anotsu or Rin there. 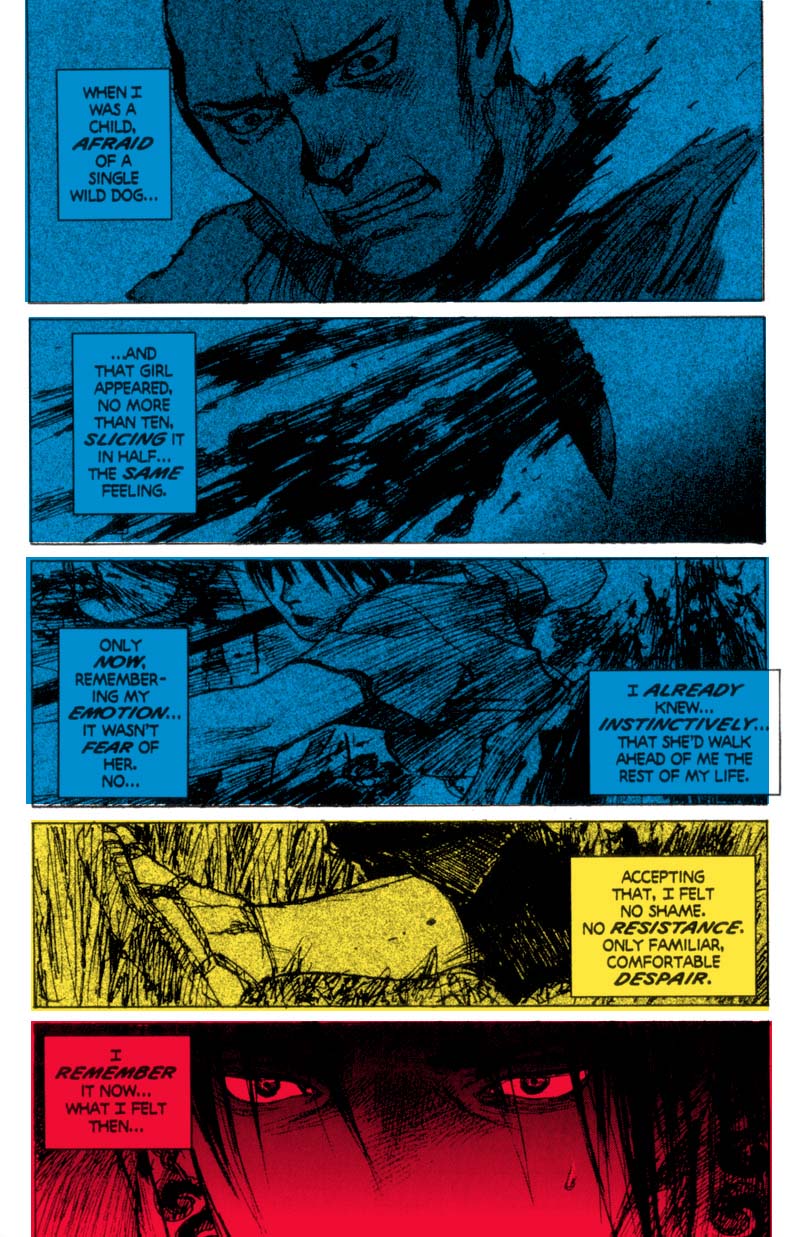 We then see the same butchering that Makie is doing almost incomprehensibly close–and obscured by more chunky blacks.

We come back out to Anotsu and: 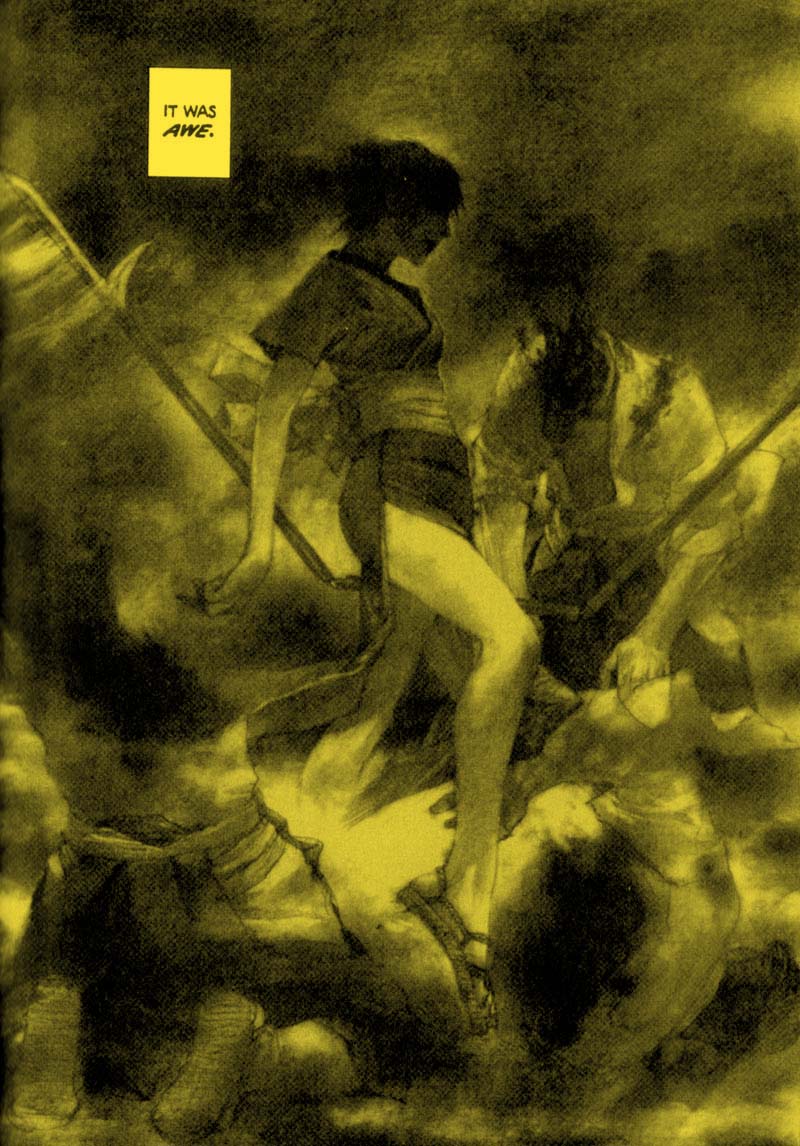 Look at how much softer this page is compared to the one where the other dude is watching Makie.  The style of Samura’s drawing has changed to reflect a momentary narrative shift and moment.  And THAT, is your climax.

And then there’s shit like this…which…I don’t even want to talk about: 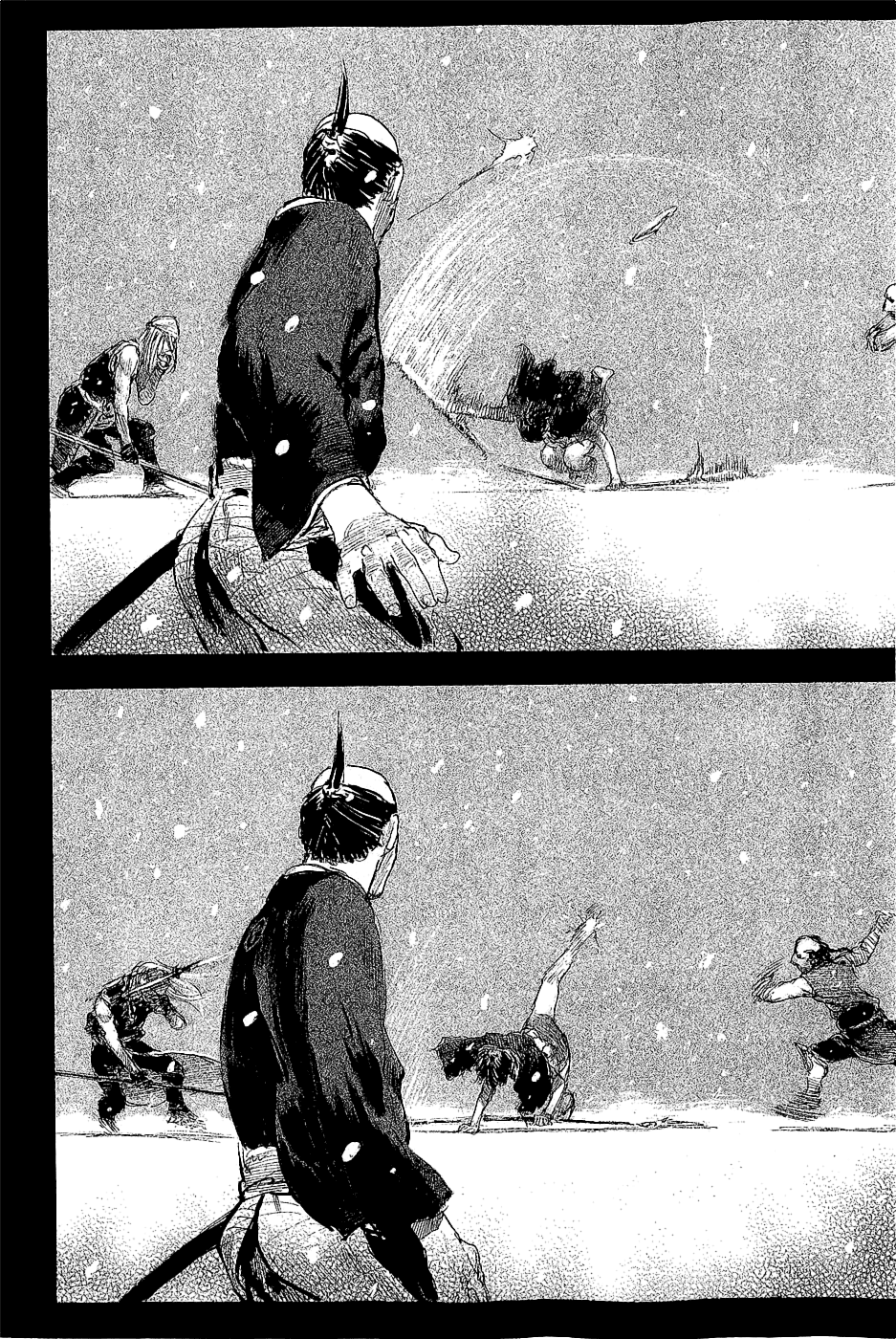 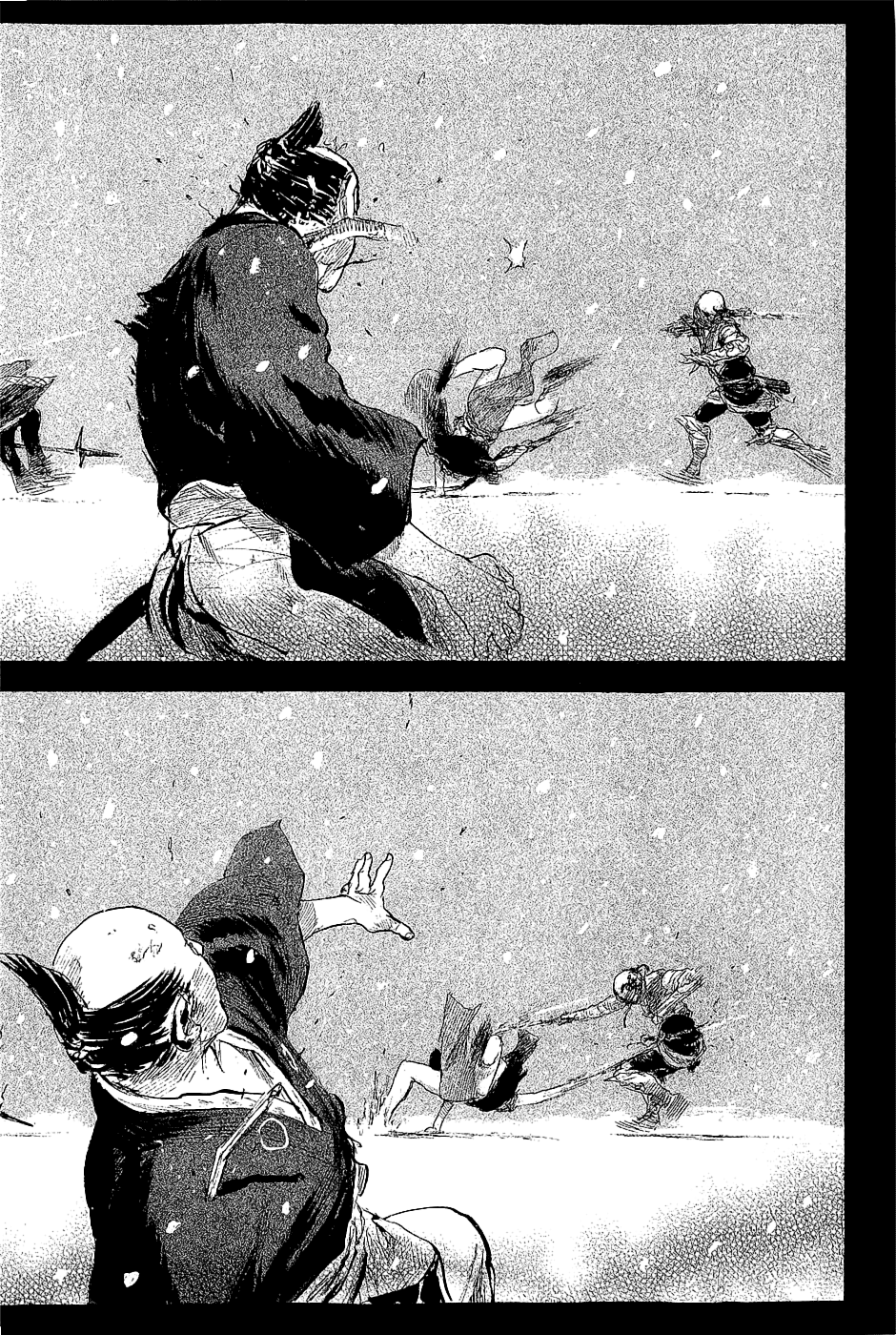 That’s some “I might as well just go back to making talking head comics” shit.

Anyways.  Dark Horse puts these books out stateside, and do a great job at it.  Probably skip the volume that has 90 percent of the Demon’s Lair arc(except for the end fight)–but otherwise…the covers are worth owning too.  Samura has an insane palette of oranges, blues, and purples.  Yeah go get those.  If this were a longer thing about Samura I’d talk about how he changed up his style midway through this book.  But who gives a crap really.