The genesis of this is probably the same place a lot of pro-Liefeld articles come from.  You’re having a conversation with someone about comics.  Things are going good.  Somehow Rob Liefeld comes up, and you get told how he’s the worst artist ever, a complete joke, and a million other secret handshake meme verses, straight from the fanboy heart.  And then you come back with…well…I uh…kinda like Rob Liefeld.  Yeah I know.  Freak show.  It’s not like this guy wasn’t THE most popular artist in comics for a time.  It’s not like he isn’t the last artist to be a complete superstar just based upon how he made comics.  Who could possibly like this guy?  But I mean, Rob Liefeld is what got me into superhero comics.  To that point, I was mostly a newspaper strip girl. But they used to sell these packages of comics at the local wal-mart(we didn’t have a comic shop in my small town), and my mom would buy them for me sometimes.  These packages would just be random issues of whatever was hot at the time from Marvel.  And some of the first onces I ever got were these Rob Liefeld X-force comics.  I remember being mesmerized by their dynamicsm.  These were comics as big as the stories were in my mind.  Everything done in almost a direct line from the brain to the pen.  No filter.  So I would class Rob Liefeld as an important creator in my story in comics, and I would particularly pick out his run on X-Force as something that I still to this day return to for inspiration.  I wouldn’t have ended up at Crepax without starting at Liefeld.  So this is part one of a three part series I am unspooling in my brain about Rob Liefeld’s X-Force run, and how there are still lessons about how to make bomb ass comics held in these pages.  The three things I’m going to focus on are: color, background patterns, page layout/composition.  It’s about how lame it is that if I try to do a search for Liefeld art on tumblr I just get pages of kids cracking wise about meaningless bullshit, that just underscores a lot of the reasons there’s a shit ton of boring comics on the shelves from companies who should know better.  I’m coming at your lame Alex Ross collection.  I’m hating on you growing up wanting to be the next Jim Lee or Todd McFarlane while you looked down your nose at Liefeld comics.  All kinds of fun stuff like that.

Part I–X-Force #4: Let the Color Express Itself–Brian Murray on the 1s and 2s 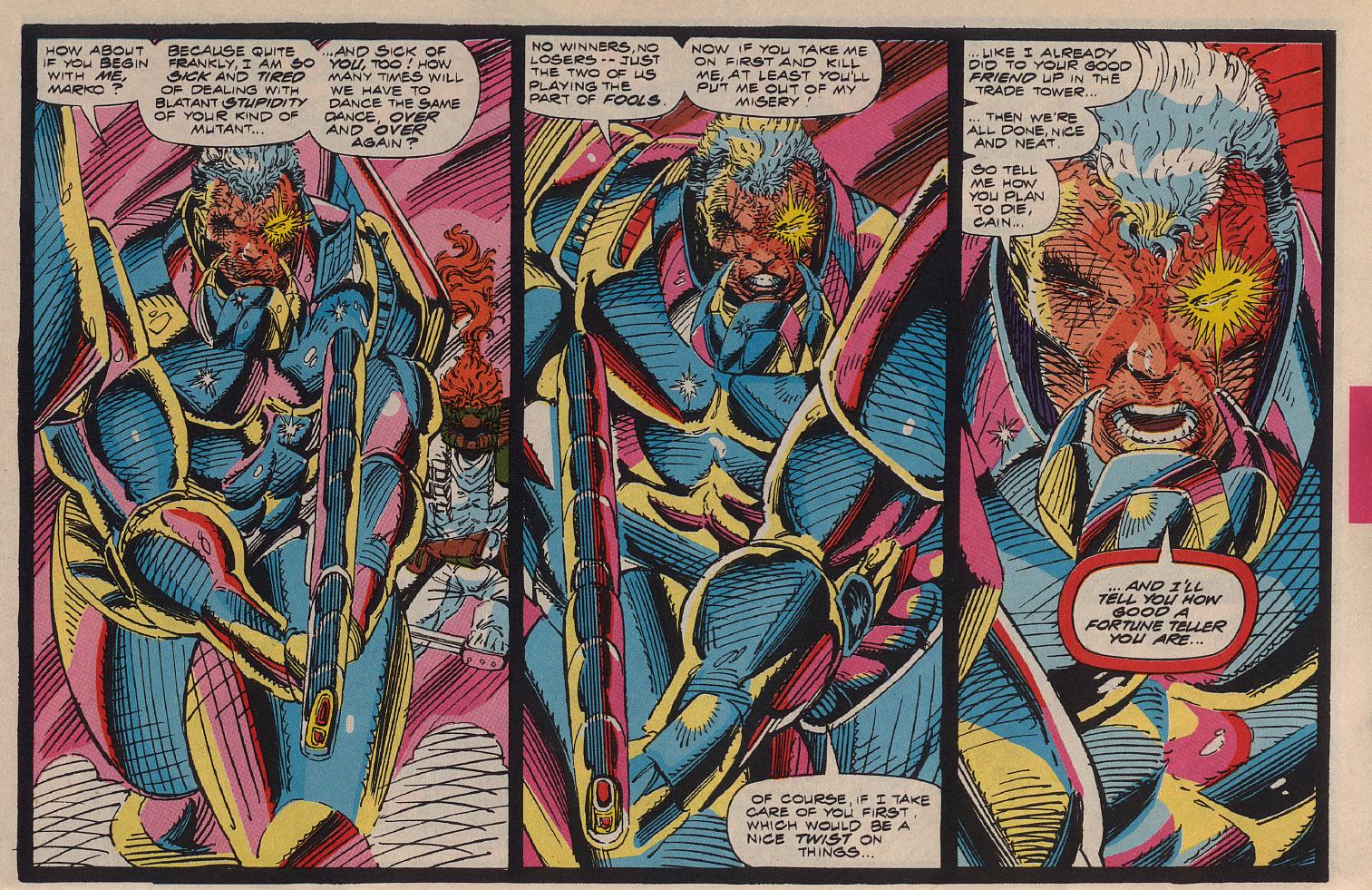 When  you look at how weird and conservative a lot of coloring in comics has become going back and seeing someone completely wild out on color is a breath of fresh air.  These comics were sort of right in front of the wave of shitty gradients that were coming to consume comics–and while a lot of the ideas behind how this book is colored are the same reasons the gradient craze took over(the desire for a more dimensional comic–the desire to try ape reality)–but that’s kind of why these are great.  It’s the beauty of putting one crazy flat color next another crazy flat color–I mean take the page above-the way light plays on Cable’s armor goes from a yellow to a hot pink to a red to a blue.  And then on his face, you have his yellow eye, and then this orange X on his face.  And then there are white clouds and his white teeth.  It’s all at once separate and cohesive at the same time.  It explodes off of the page.  You almost need those black boundries for the panels just because they are the only thing that can contain the color.Brian Murray colored this issues(it’s interesting to compare issue 4 and 5, because 5 was colored with the help of WitterStaetter, and that issue is more toned down in it’s choices), and what this does for his work is incredible.  Compare it to this later Liefeld work which uses gradients: Or his Youngblood work: 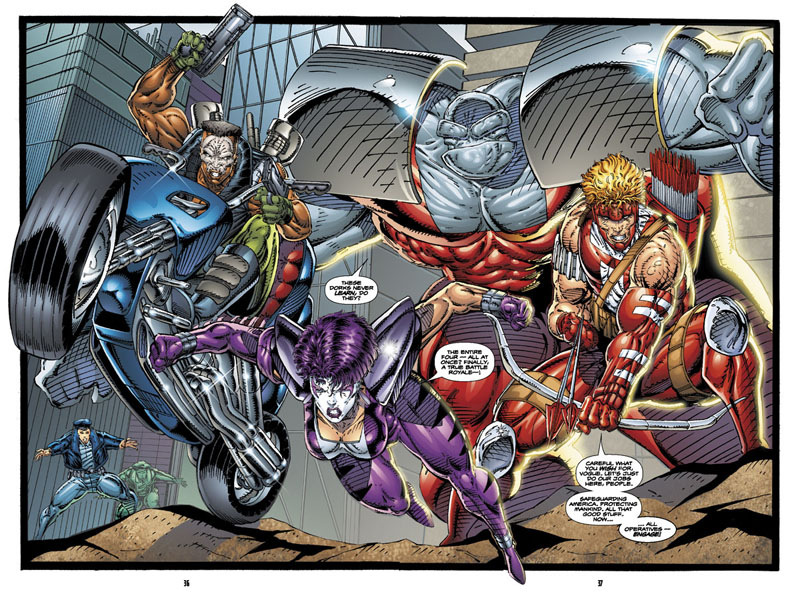 It is so much less dynamic when it is colored this way.  The color choices are so much more literal in these two other pieces, and there is less playfulness in the juxtapositions. 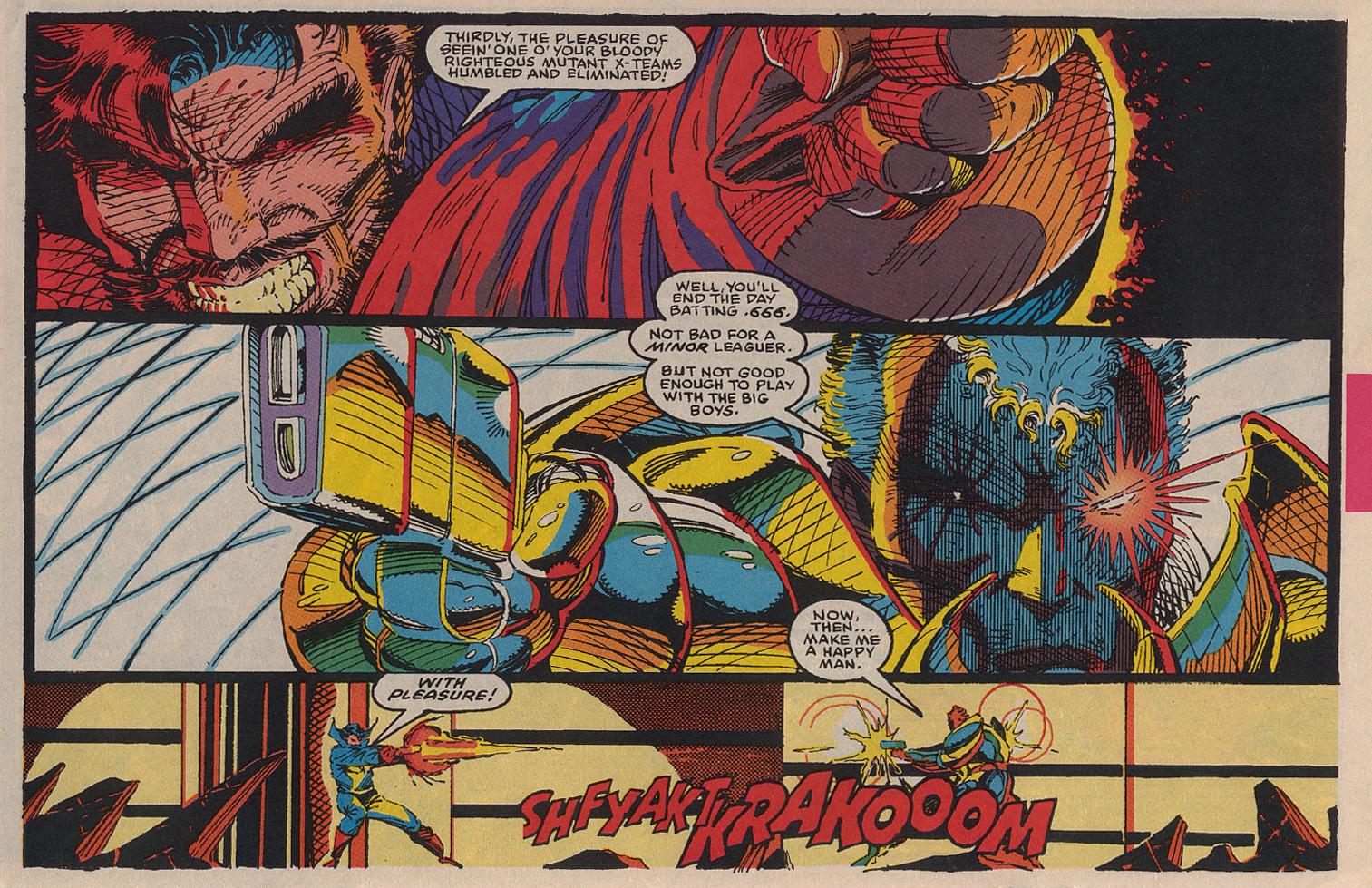 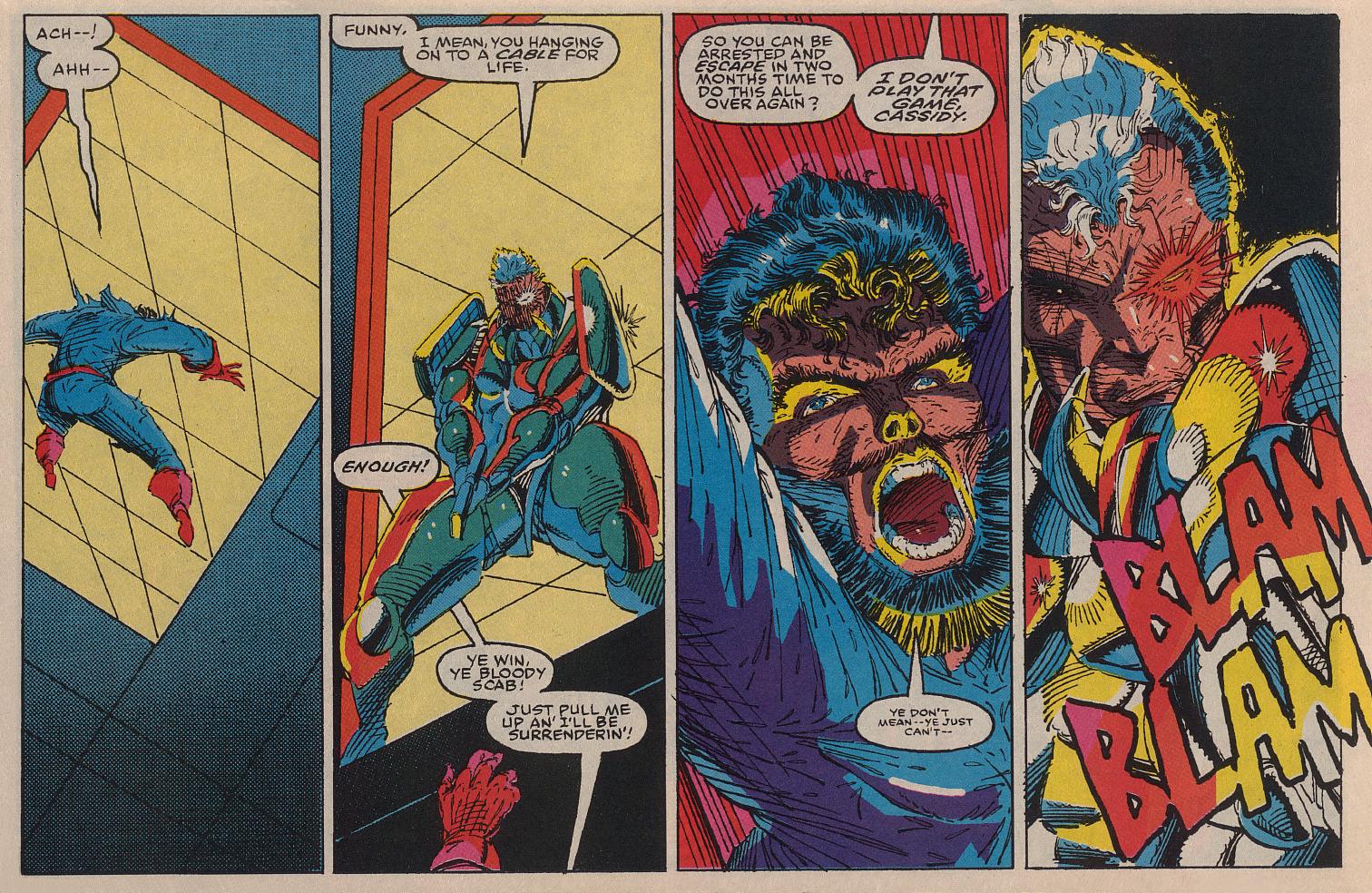 I mean this sequence where Cable fights Cassidy is A-MAZING looking.  It is almost like something you’d expect to see from a Blade Runner comic or something.  The impressionistic use of greens and purples–that perfectly chosen organge doorway–and the way the orange in that doorway meets the Cable’s armor–and shock…COLORS it orange.  There’s an insane play in X-Force number 4 where the colors are not stable–they morph and change reflecting time and surrounding–like y’know…the way light and colors do.  Light isn’t a brick, it’s a wave.  The red, purple, and blue in the top panel of Cassidy in the first page absolutely stuns me everytime I see it.  Why shouldn’t comics look this good? 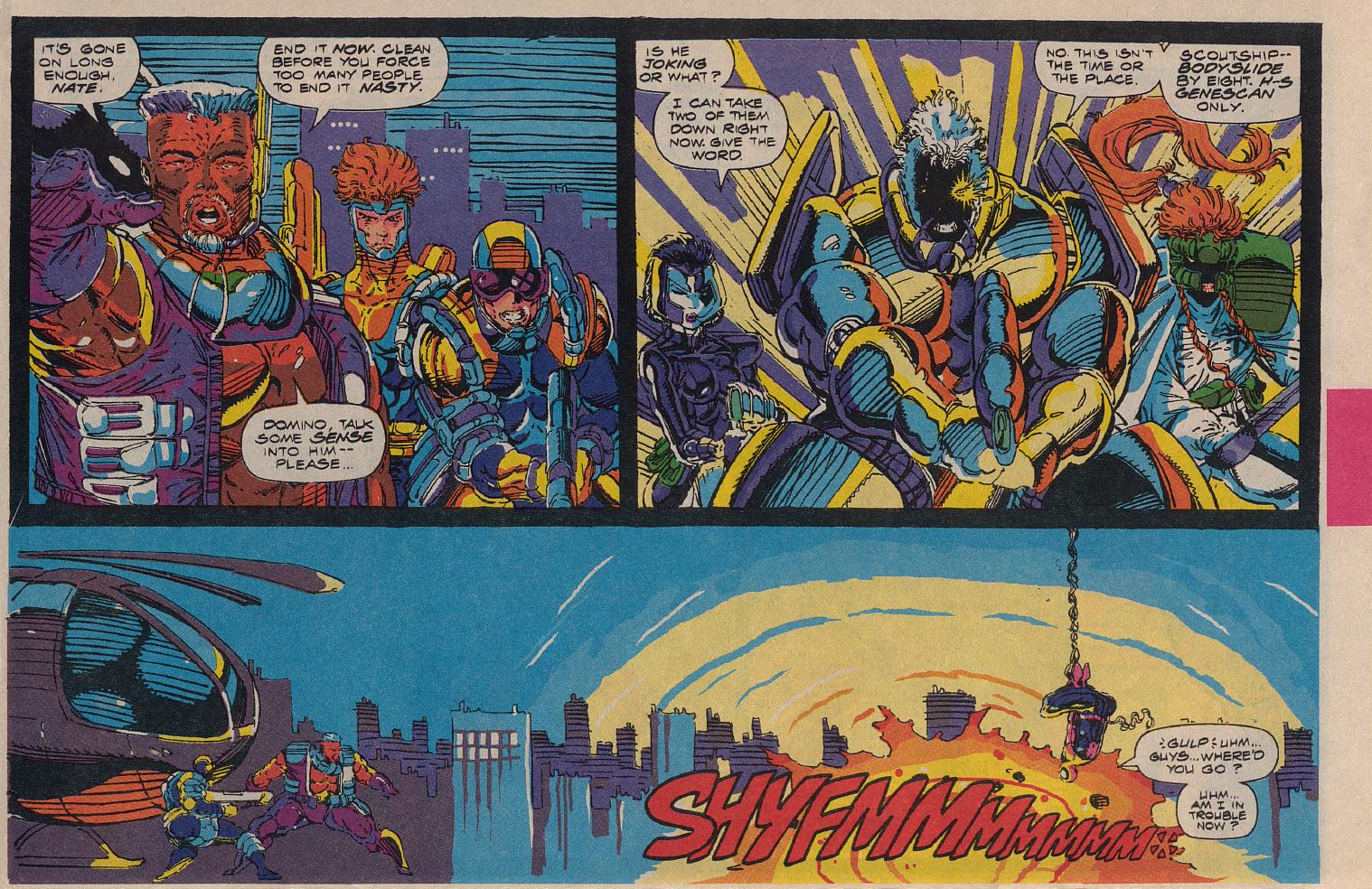 Look at the purple and golds being used in this top left panel of Bridge.  The way that white hits in the midst of that purple chaos is color nirvana.  Coloring the book this way also plays perfectly with the dynamic hatching techniques that Liefeld uses, as well as his strong composition skills.  It plays completely to his strengths.  Look at the way the purple highlights play with the grain of Liefeld’s marks.  As a mark maker, Liefeld is stylistic in the same way that a Giannis Milogiannis is.  You don’t need perfectly executed crosshatching for a superhero comic.  The messiness and the play of the marks and the shapes they create is a part of the show.  And then the way the coloring is done is like another layer of marks on top of marks.  This is coloring that is working in time with the art style, not against.  I also love the way Spider-man is lit in the last panel on the page.  That faded red to reflect the explosion in the background, is pitch perfect.

It is a shame that so much of Liefeld’s work after this got more toned down in it’s coloring.  It would be kind of cool to see his stuff re-colored in this style–or for his newer comics to go in this direction.  With how far printing techniques have come–I would think you could end up with a truly mindblowing looking book.